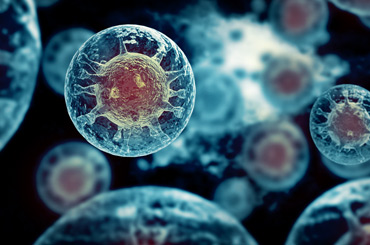 Dark field diagnostics is a special form of diagnosis in which a small drop of capillary blood is taken from the patient’s finger. The blood can then be observed over a longer period of time under a darkfield microscope. This has a special condenser that makes everything that is present in the blood optically visible – and this without blending particles, substances, fungi, viruses, etc. or the need to colour the cells. With the darkfield microscope we actually see into the microcosm of the blood. Thus, otherwise invisible phenomena can be observed, which allow conclusions to be drawn about existing diseases, but also about tendencies of a disease that will only manifest themselves in the future.

Just as in ancient times the bodily fluids of a sick person were examined, this tradition has continued until today. Just as the phrase “I KNOW THAT I DO NOT KNOW”, coined long before our time, is still ahead of the fascinating technical progress and has thus retained its validity, so it is with many medical examinations, among other things, which allow a wide range of interpretation and are good for making a suffering and frightened person even more afraid and so compliant.

Until a good 20 years ago, when herniated disks had to be detected with contrast medium injections into the spinal cord, it was not known that about 60% of the healthy, pain-free population has herniated disks that are so large that in case of segmental complaints they have to undergo surgery immediately. This means that in medicine, findings have to be put into perspective before a conclusive statement can be made. So you can call almost any back pain a herniated disc with a clear conscience, if you want to.

The same applies to many blood tests: A laboratory check with 50 different parameters can produce completely normal values and the patient is still seriously ill – because many things have not been examined, many things have not been thought of and many things cannot be examined because the so-called progress has not yet progressed far enough. In the medical HERE AND TODAY one has to look at many things in a mosaic-like and value-free way next to each other and in accordance with the clinical picture and with the help of one’s own clinical experience and technological possibilities. Dark field microscopy is such a piece of the mosaic.

For more than 100 years, it has been used to examine what is probably the best known body juice, namely blood. Not only macroscopically, i.e. with the naked eye – although you can already see a lot here: If the colour and consistency is very greasy, this is an indication of a lipid metabolism disorder, if it has the colour of a matured red wine or of a rosé wine, both are indications of completely different disease possibilities, which today, however, should better be clarified with more modern laboratory methods. In the 1860s, the Frenchman Prof. Dr. Dr. Pierre Bechamp microscopically found small microorganisms in all cells that can develop into bacteria and concluded that diseases originate inside the body. At about the same time Virchow postulated the so-called cellular pathology, which sees the cause of disease in a disturbance of the individual cells, similar to Pasteur, who assigned the individual diseases to the respective microorganisms as the cause. Prof. Claude Bernard, a contemporary of Bechamp, finally agreed with both by stating that THE MICROBE IS NOTHING – THE MILIEU IS EVERYTHING. He was, if you like, the first renowned scientist to relate environmental problems (which exist in the microcosm as well as in the macrocosm) to the causes of disease.

From today’s point of view he must have been right, but even 150 years after this succinct statement, this has hardly been reflected in our medical world view. Because nutrition belongs to the environment and the inner world, the importance of which has not yet been adequately appreciated in the training of doctors. Proof of this is what patients are given in the vast majority of hospitals – but it is not so suitable for recovery. Within certain limits and after consultation, it is therefore often advisable to “feed them”, as is the tradition in all developing countries.

Dark-field microscopy is therefore a valuable aid in the assessment and monitoring of diseases today. Even if someone may be critical of this method, it serves as an important indicative diagnosis that can be confirmed by “accepted” laboratory tests. One can see changes in the environment, acidosis, coagulation disorders, oxygen deficiency, organ weakness, bacterial and parasitic stress, etc. It is therefore today a valuable additional diagnosis to the usual laboratory tests: Because one can see things that one would otherwise not see and from which one can draw therapeutic conclusions.

It is not a so-called “guideline medicine”, which the cost bearers always invoke when they do not want to reimburse the costs – also and especially where the established medicine was not satisfactory for the patient. However, it cannot and must not be the task of the physician to refrain from doing what he expects to have a better effect simply because clerks or experts are paid to refuse reimbursement on the grounds of “guideline treatment”. This is the case if the patient is to be expected to undergo treatment only at the risk of irreparable harm. This also clearly contradicts our fundamental humanitarian rights, including the usual case law of higher and highest courts. In the case of resistance to therapy under orthodox medical treatment, there is also a state of emergency that overrides the usual case law. This is also seen by the Constitutional Court – according to the motto: Imagine it’s war and nobody goes there!

In the last century the German scientist Günther Enderlein (1872 – 1968) continued the work. He developed drugs (so-called nosodes) based on the findings of the dark field, which are still prescribed today in accordance with the dark field findings.

At that time Enderlein already represented today’s proven knowledge that we live in symbiosis with the so-called archebacteria; these were the very first unicellular organisms that still had a metabolism that required only carbohydrates (sugar) and no oxygen to generate energy. The further development of the unicellular organism into a multicellular organism required a more economical energy production, which was only possible with oxygen and sugar together. Thus, mitochondria were formed from these unicellular organisms, some of which still exhibit the metabolic properties of these archaebacteria today. Mitochondria are called the energy power stations in the cell. They are therefore relics from the first bacteria, which can develop into disease-causing bacteria in the event of an incident. So much for the observations of the aforementioned researchers.

The incident: It is defined by “environmental changes”: Wrong diet, distress, medication, electrosmog, pH changes in the tissues, hormone deficiency and many more. These (internal) environmental or milieu changes then require the cell to revert to stored “energy generation programmes”, since the mitochondria can no longer use oxygen in the usual way (the mitochondria are severely decimated in number and size in many chronic diseases). The cells convert to the archaic glucose consumption without the help of oxygen and thus offer a fertile terrain for the growth of pathogens. This is roughly the mechanism for chronic and disease.
From a scientific point of view, this is now largely verifiable and therefore also offers a working matrix for treating diseases not only symptomatically but also – if you like – more causally or regulatively. As an example of these arguments – which may seem somewhat simple to some – the following from routine medicine should be noted:

PET is used to monitor the progress of cancer. This involves injecting the patient with radioactively labelled glucose to find out where it accumulates. It accumulates where the hunger for glucose is greatest – i.e. in the cancer cells. A cancer cell consumes up to 30 times more sugar than a healthy cell because it can hardly use any oxygen. Studies have also shown that the partial pressure of oxygen is lower in chronically inflamed tissue. This means that chronic inflammation is the precursor for many other diseases, including cancer, because it prepares the “inner environment” for them. In a British study of 48000 men between 40 and 75 years of age, it was found that the risk of developing cancer increases by 30% if they have inflammations in the area of the teeth or jaw bones, for certain organs even by 50%. This coincides with my observation of many years that most tumour carriers carry between four and twelve devitalised teeth with them.

In summary, darkfield microscopy is a simple control procedure in the treatment of many clinical pictures. It is considered an indicative diagnosis and not an exclusion diagnosis; the theoretical principles are compatible with the current state of knowledge, which therefore does not necessarily already enjoy general acceptance.