The different forms of acupuncture – helpful since thousands of years 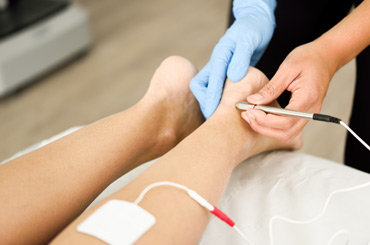 Acupuncture is familiar to almost everyone in Germany. It originally comes from China and has been practiced there for more than 5000 years. After the Cultural Revolution of Mao Tse Tung, it is now being used again for many different diseases. It is used during operations to limit the use of anaesthetics and thus accelerate the healing process. This gentle method can also often be used to operate on patients who would be exposed to too great a risk under “traditional” anaesthesia. Furthermore, labour, in this case doctors, are cheaper in China today than drugs from Western laboratories. However, since the time schedule of an acupuncture anaesthesia is somewhat more complex, this form of anaesthesia has not been able to establish itself in our country.

There has been a lot of speculation about the mechanisms of action of acupuncture, but this will not be the subject of the explanations at this point. Only so much can be said: Obviously – to use computer language – the brain undergoes so-called reprogramming, so that the body shows different behaviour after several treatments. It is as if a different software had been loaded onto the patient, because increased amounts of endorphins (messenger substances for the brain) are released in the treated organism, for example.

The effect of the treatment is most obvious in the form of a slight muscle slackening and fatigue and small children usually fall asleep after a few minutes. In the case of pain disorders, depending on the technique used and the length of the existing complaints, pain relief or even freedom from pain occurs already during the treatment.

However, deterioration can also occur. This is then not necessarily due to the lack of qualification of the therapist, but often a sign that deeper-lying causes of illness are reported by acupuncture. The doctor must pay special attention to this and requires patience from the patient so that the reaction can be interpreted correctly and the treatment can then be successfully completed.

The ultimate effect of acupuncture is reflected in a change in the initial vegetative and hormonal situation of the patient, allowing many chronic and most chronic disease patterns to return to normal. Especially those clinical pictures for which our modern medicine can often only achieve “success” at the cost of massive side effects, often still respond quite well due to the completely different approach of acupuncture. This is based on thousands of years of experience, which cannot be replaced by “modern scientific models”. It is simply true – just as it is true that it is cold in winter and warm in summer. Why and how is ultimately irrelevant, even though this question has always preoccupied mankind. But any interpretations, however lyrical they may be, do not change the facts.

There are different forms of acupuncture. The most common one is the so-called body acupuncture, in which needles are pierced at certain points of the body. These special needles can also be electrically stimulated to achieve certain therapeutic effects, or “moxed”, i.e. treated with heat or simply irradiated with a laser light. In addition, there is a special form of ear acupuncture, which has been further developed mainly in France, and oral acupuncture according to Gleditsch, in which certain points in the mouth are injected with medication. There are also individual special forms, which many doctors develop in the course of their work.

Also worth mentioning is cranial acupuncture, which is used especially for paralysis and after strokes, but also works very well for severe pain. This method is used with great success in some Japanese clinics to treat stroke patients shortly after the attack. In our practice, unfortunately, these patients are often only seen after one or two conventional rehabilitation cures have been completed. This is a point in time that is usually much too late to expect too much from an acupuncture treatment.

As a rule, acupuncture treatment for chronic cases is performed serially, i.e. eight to twelve times in a row. Depending on the disease, this is combined with heat (moxa), cupping and chiropractic therapy. However, for acute complaints, one or two treatments are often sufficient. In the case of chronic diseases, acupuncture is often supplemented with medicinal measures, depending on the situation, as is traditional. Here we choose, if possible, from the treasure of natural remedies available in our clinic.

The electro-acupuncture according to Voll

The electro-acupuncture according to Voll, short EAV, was developed in the 1950s by Dr. Reinhardt Voll. It measures the electrical behaviour at the acupuncture points of the body with a specially developed device. Dr. Voll used a diagnostic method developed in Japan, in which the temperature sensitivity of the patient is measured at the starting and end points of the meridians on the hands and feet with a glowing rod. Here, extreme side differences were often measured at the same points in disease states. What the Japanese did with heat is achieved in EAV with defined current loads.

EAV is both a diagnostic and a therapeutic method. With its measurements, one can make statements about so-called energetic disturbance behaviour and obtain indications of disturbed body and organ areas. These can then be specifically clarified, e.g. with computer-controlled regulation therapy, Kirlian photography, X-ray diagnostics or CT (computer tomography), magnetic resonance imaging or ultrasound.

Dr. Voll, however, developed EAV even further: He tried to normalize the measured values that deviated from the standard values with drugs that he brought into the measuring circuit. In doing so, he developed a method that is widely used today, which is extremely successful with the help of a specific drug test – in which mainly homeopathic preparations are used.

Why this phenomenon occurs is still only partially understood today. However, it is likely that similar phenomena as in pulse palpation or kinesiology are involved here. Many research institutions have so far been trying in vain to explain the phenomenon – for example, the phenomena of slow brain potentials, with the help of which humans can influence computers, are conceivable. Other researchers speak of morphogenetic fields in this context.

The various forms of acupuncture are used, among others, for: