The Atlas therapy eliminates many pains quickly and effectively 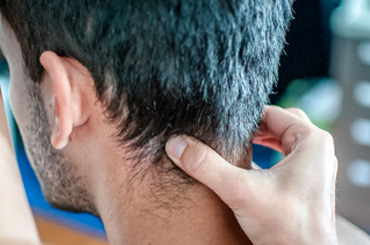 The Atlas is the first cervical vertebra and therefore one of the “pivotal points” for our holistic health – in the truest sense of the word. At this height, the spinal cord houses a nerve core which registers the body’s movements and transmits them to the brain. A defined impulse leads to a generalized muscle relaxation. The muscles that supply the veins and arteries also relax. This results in better blood circulation in the head, relaxation of the chewing muscles and obviously also in a relaxation of constricted veins that carry the blood from the head to the heart. This is probably the reason for the neurological improvements in the findings of multiple sclerosis patients that occur immediately afterwards, since it is precisely in this disease that the brain-draining veins exhibit strictures, as has only been established by a radiologist in recent years.

The French physician Albert Arlen (1925 – 1992) recognized the linchpin of the atlas as a focus in relation to numerous ailments and diseases and developed this effective therapy on the atlas.

The atlas therapy has proven to be particularly effective for pain in the spine, functional disorders of the musculoskeletal system, forms of dizziness, tinnitus, herpes zoster pain and whiplash injuries. But also for various neurological diseases, the Atlas therapy offers good support, e.g. for the already mentioned multiple sclerosis and myopathies.

In addition, scientific research has now shown that the Altas therapy is a useful addition to neurophysiological physiotherapy and a step forward in the treatment of children with movement disorders.