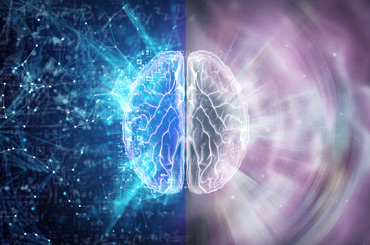 Multiple sclerosis is a disease that has increased significantly in recent years. It affects more women than men and the first symptoms can be found in about 5% of cases in people under 18 years of age. Before the introduction of CT (computer tomography), which allows the focus of the brain to be seen, the diagnosis was often made very late. I remember that I had made the correct suspected diagnosis in a number of patients before that time – in the 1980s, that is – but that this was not confirmed clinically until much later. This meant that valuable time was lost for some patients. Especially: During this time, due to the variety and lack of constancy of the symptomatic phenomena, patients were often simply filed away in the “psycho drawer”. At least that has changed since the 1990s.

Insulin-potentiated therapy (IPT) brought a real breakthrough in the previously frustrating MS treatment. I have been carrying out this treatment for over 10 years now and have been able to achieve a standstill in many cases without the massive side effects that are very often seen with the interferon treatments that are so popular today. A new study from Vancouver on more than 2,500 patients shows that interferon therapy cannot significantly reduce progression in relapsing-remitting MS – i.e. the main effects are reflected as side effects. In plain language: the Hippocratic principles of medicine are not applied to the “official therapy” of multiple sclerosis, but commercial interests are given priority.

What is multiple sclerosis and what do we currently know about it?

MS is an autoimmune disease. The condition is preceded by inflammatory processes. In MS it is mainly inflammation of the brain vessels of different etiology and different localization. These inflammations sometimes cause strictures (constrictions) of the brain-derived veins, and in some cases also in the veins of the spinal column. This leads to the known reflux into the brain and to the known – in the CT visible – deposits.

The Italian doctor and researcher Prof. Paolo Zamboni has found these strictures described here only in patients suffering from multiple sclerosis. In all other diseases these strictures are not found!

He dilated these strictures with a balloon catheter – and lo and behold: the clinical symptoms improved suddenly and lasted more or less long!

Many years earlier the Frenchman Dr. Arlen developed the atlas therapy named after him after Arlen. In his clinic he mainly treated MS patients, cared for them for decades and kept their state of health very satisfactory compared to the usual therapies. His explanatory model: Due to the neuroanatomical peculiarities of this region, the impulse technique on the 1st cervical vertebra causes a relaxation of the entire musculature, also and especially of the vascular muscles. As a result, the vessels supplying the brain dilate and allow the blood to circulate better. In this way, Atlas therapy achieves an analogous effect to Prof. Zamboni’s method, but not as long-lasting.

I myself have been practising Atlas therapy for a good 25 years. At the beginning of the millennium I learned another ingenious therapy, which had already been used to cure neurosyphilis in the 1930s when there were no antibiotics – the already mentioned insulin-potentiated therapy (IPT). By chance (or fate?) I soon started to treat MS patients with IPT with results I had not expected. Sometimes after only a few treatments the relapses stopped, i.e. they came to a standstill. If a new episode came, it could often be cut off with 2-3 treatments. Later I found out that these were not just individual cases, but that they were regularly reproducible in not too far advanced cases – and this with as few side effects as possible or – freedom! In addition, the treatment is socially compatible, because the patient’s life perspective is not so extremely threatened by occupational disability, poverty and isolation as by the consequence of ineffective and side-effect strong orthodox medical “services”.

There are certain similarities in the symptoms of multiple sclerosis. Often a cranio-mandibular dysfunction is evident. This is usually a compression of the temporomandibular joint (the “intervertebral discs” in the temporomandibular joint are partially destroyed by excessive compression). The muscles of the head, chewing and neck are tense, the stylohyoid process is often prolonged: these are all peculiarities which in themselves can lead to a compression of the neck veins.

In the past 10 years, other approaches and methods have also emerged which can have a synergistically positive effect on this disease. This is the treatment with immunologically active compounds that are close to the D-vitamins and have a great influence on autoimmune processes as well as on hormonal regulation. In cooperation with renowned colleagues, we have now been able to achieve significant results in practice by using certain forms of the vitamin D group. In my opinion, a revolution is on the horizon here!

The infection history that led to the autoimmune destruction of the nerve membranes must be taken into account. The unsteady course of the disease allows the conclusion that the infections can flare up again and again. It must also be taken into account that autoimmune processes have no chance of spreading in other ways. In this context, attention must be paid to the various food intolerances, some of which can be caused by autoimmune diseases.

For an optimal therapy, a comprehensive laboratory analysis must first be carried out to gain insight into the current infection burden. The darkfield examination can provide valuable information in this regard. The acid-base balance must be determined and – in most cases – treated. The so-called respiratory chain (it produces the energy of life, without it we are not viable) must be optimized with plant, mineral, homeopathic remedies, with ozone-oxygen treatments, with vitamins and much more.

With antibiotics we treat the always existing infection load in form of an elegant, above mentioned therapy (IPT), with which we can selectively apply the antibiotics into the diseased cells and therefore need only small doses. Atlas therapy, temporomandibular joint treatment, change of diet (often requires intensive coaching) and optimisation of the intestine as a carrier of the immune system are further measures to ensure that a multiple sclerosis patient can continue to live a life worth living, joyful and intensive.

As you have probably read between the lines, I also pay special attention to the treatment of multiple sclerosis. Of course, I cannot show all the parameters of this complex clinical picture on a website, especially since MS has a particularly individual character with each patient. I therefore ask you to contact me personally. I would be happy to deal with your case and am confident that I can help you, no matter what stage the disease is currently in.