The insulin potentiated therapy for the treatment of cancer, borreliosis and multiple sclerosis 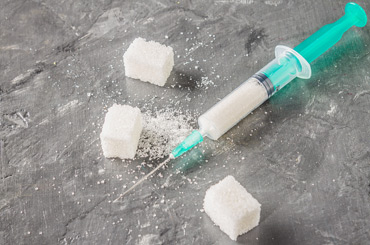 Insulin Potentiated Therapy (IPT) is a form of therapy that has been used and developed for more than half a century. With the help of targeted hypoglycaemia, many diseases are particularly susceptible to attack and can thus be treated.

This therapy was “discovered” in the 1930s in Mexico by the physician Donato Perez Garcia (1876 – 1971), when insulin had just found its way into medicine to treat diabetes.

In this so-called “pre-antibiotics era” and “pre-cortisone era” many diseases were not curable and Dr. Garcia recovered from chronic diarrhea with severe weight loss within a few months in a self-experiment. This self-experience was to become the cornerstone for an increasingly sophisticated insulin therapy and an ever-increasing range of diseases that were successfully treated with it. He cured the then practically incurable neurosyphilis with low doses of the then common but extremely side-effect rich drugs used in hypoglycaemia therapy, and was able to prove that the drugs also reach the brain during this treatment, i.e. the blood-brain barrier becomes permeable in hypoglycaemia.

Thus, he was able to heal the stomach ulcer, which had been so dreaded until a few years ago, decades ago when the bacterium Helicobacter was not yet on everyone’s lips, but was present in many stomachs. Joint rheumatism, chronic infections, syphilis and gonorrhoea as well as asthma were grateful indications. In the 1940s he also began to treat cancer and had respectable results, but these were not noticed in neighbouring America.

The special feature of Insulin Potentiated Therapy (IPT) is the treatment without or with few side effects, because it does not destroy the entire regulatory capacity and the human immune system. In addition to vitamins and minerals, antibiotics, antifungals, virustatics and chemotherapeutics are usually used, but in a fraction of the usual dosage. Because of the hypoglycaemia, the administered drugs are literally absorbed by the diseased cells, because they have a much higher energy requirement or a higher number of insulin receptors, which are responsible for guiding the glucose into the cell when needed. When the hypoglycaemic state is interrupted, high glucose is injected after the active drugs have been administered, and so everything is first absorbed by the osmotic suction into the cells that absorb the most glucose, which are the cancer cells or chronically inflamed cells, as we know from PET examinations. This means that with a fraction of the usual medication, I can reach the diseased cell in a targeted manner, reduce the often delethal side effects and do not destroy the immune system, which places narrow limits on many of the treatments commonly used today.

Diseases for which this treatment has proven to be effective are: