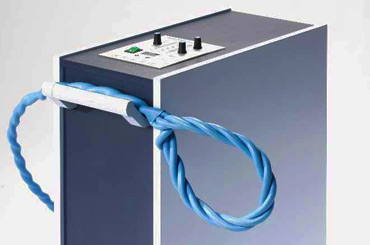 As one of the first practices in Germany at that time, we already started working with non-invasive induction therapy (REHATRON therapy) in 2005, which can be used for almost any disease. Non-invasive Induction Therapy (N.I.I.T.) is based on the findings of various important scientists of the last century, such as Nikola Tesla, Georges Lakhovsky and Raymond Rife, who recognised that very short current pulses with a high-frequency magnetic field can positively influence disturbed cell membrane potentials and restore them to their optimal state.

All cells of higher life forms have a cell membrane. The transport of ions through the cell membrane (ions are atoms and molecules that have different electrical charges and form salts by ion bonding. Solutions containing ionic substances conduct electric current and are therefore called electrolytes) leads to the development of membrane voltage, an electric voltage between the inside and outside of the cell membrane. The membrane voltage of a healthy and active cell is usually 90 to 100 millivolts (mV). Under these conditions an optimal supply and disposal of the cells takes place: The most important ions of biological electrolytes are sodium, potassium, calcium, magnesium, chloride, phosphate and hydrogen carbonate and are vital for the function of the cell. The electrolyte concentration in the cells is regulated by so-called ion channels.

If a cell becomes diseased or degenerates, it reduces its membrane potential accordingly. The membrane becomes porous and the various exchange functions of electrolytes, minerals, nutrients, enzymes and hormones can no longer take place. The membrane tension decreases rapidly and cancer cells, for example, only have a voltage potential of less than 20 millivolts.

Almost every disease is related to disturbed cell membrane potentials. This is where non-invasive induction therapy (N.I.I.T.) comes in: It enables the membrane potential to rise again and causes diseased or degenerated cells to either recover or die (apoptosis in cancer cells).

The N.I.I.T. works with electromagnetic bioenergy. Via a treatment loop, which is placed on the body parts to be treated, short, extremely strong magnetic fields in the microsecond range are non-invasively released to the body. With peak powers of up to 120 million watts, the strength of the short-term energy release is far above that of the cell membrane potential, so that weakened cells can be permanently recharged and degenerate cells regenerated. The immune system is reactivated and healing energetic processes are triggered in the cells, leading to true regeneration. However, if a cell is no longer able to increase its membrane potential to over 20 mV despite the influence of N.I.I.T., the organism destroys the cell itself using macrophages and breaks it down.

Non-invasive induction therapy should not be confused with classical magnetic field therapy or shock wave therapy etc: Because unlike other forms of treatment that work with magnetic fields, N.I.I.T. does not produce specific frequencies to stimulate certain types of cells. Instead, it induces a much stronger, high-frequency magnetic field, which is generated by high currents. Thus, the N.I.I.T. is able to generate the necessary voltage in the body to raise cell membrane potentials in the long term and permanently. N.I.I.T. is therefore a real regeneration therapy, which treats the causes of a disease in the most direct way and not its symptoms.

In practice, non-invasive induction therapy is therefore used either singly or in addition to other therapies for almost all diseases. The treatment is painless and free of side effects and is carried out on an outpatient basis on the patient sitting in a treatment chair without having to take off any clothing. Neither before nor after the treatment rest periods are usually necessary. By the way, many patients are “energized” by the therapy, i.e. they are fitter and more active after the treatment and find new strength.