The TPS® treatment for Alzheimer’s dementia: Approved, effective and safe. 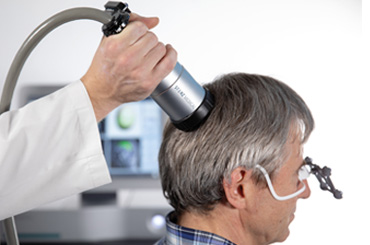 For the first time, the clinically approved TPS therapy is available for patients with Alzheimer’s dementia disease in Bavaria.

As early as the mid-1990s, doctors and scientists recognised the effectiveness of shock waves for peripheral neurological diseases such as post-traumatic spasms, spastic paralysis, coma vigil states and polyneuropathies (Dr. med. Henning Lohse-Busch, Bad Krozingen). After many years of research and development by STORZ MEDICAL AG, Switzerland, the first clinical treatments of patients with Alzheimer’s disease with the NEUROLITH® system took place in 2014. In 2018, transcranial pulse stimulation (TPS®) with the NEUROLITH® system was the first and so far only procedure of its kind worldwide to receive approval for the “treatment of the central nervous system of patients with Alzheimer’s disease”. 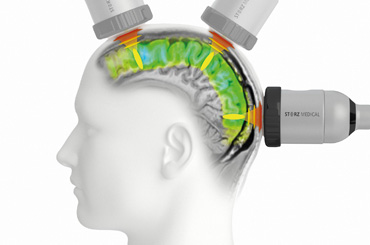 With the TPS®, the brain regions can be stimulated up to 8 cm deep. The extremely short stimulation duration prevents the risk of tissue heating in the brain. This allows the impulses to act on the region to be treated with the highest clinical efficiency.

The TPS® treatment takes place through the closed skullcap. During the treatment, which lasts about 30 minutes, the patient sits relaxed in a treatment chair and can move freely. A head shave is not necessary!

So far, significant increases in the so-called CERAD test (a specially developed, multi-stage questionnaire to determine the stage of Alzheimer’s dementia) and a reduction in depression (Becks Depression Index) have been shown in mild to moderate Alzheimer’s dementia. In the meantime, more than 1,500 treatment sessions have been carried out with the NEUROLITH® system. Side effects did not occur.

The patients should be able to better memorise the contents of conversations or find objects that have been put away more easily. Disturbances in planning and organising thinking, formulation and orientation disorders should also be improved.

The aim is to specifically counteract the limitations of memory, thinking and orientation in order to improve the patient’s ability to lead an independent life. The patients should be enabled to communicate better with their environment again.

In our practice clinic Dr Baltin we offer this forward-looking treatment on an outpatient basis. A treatment cycle consists of six units, which are carried out within two weeks. A further six to nine therapy units are recommended during the next 12 months or continued in an individually structured manner.

Other areas of application for the TPS®:

Do you have any questions or would you like more information about TPS®? Then feel free to write to us or give us a call.