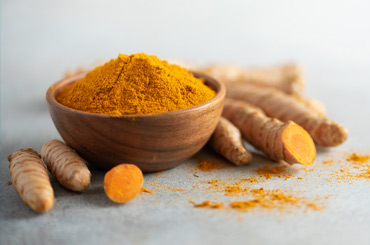 Curcumin, also known as turmeric or turmeric root, is an intense orange-yellow substance extracted from the turmeric plant. Curcuma is particularly useful as a spice in curry powder and as a food colouring. In India curcumin is a daily component of the diet, one could also say a staple food. And so it is not surprising that the incidence of breast, prostate, colon and lung cancer in India is ten times lower than in the United States! Scientists attribute this to the effect of curcumin, especially since there are now about 3,000 studies that prove the effect of curcumin in cancer therapy. The German Society for Oncology as well as the corresponding committees in Austria and the USA recommend the use of curcumin as an additive therapy.

In the meantime, it has been proven in many cases that curcumin can inhibit the growth and cell proliferation of tumours as well as the formation of metastases. Curcumin is incorporated into the cell membranes of cancer cells and makes them more permeable and thus more vulnerable to attack by the immune system, biological cancer therapies and chemo- or radiation therapies. Another positive effect is that the membranes of the are strengthened, making them more resistant to pathogens of all kinds.

Therapeutic use of curcumin

In the plant itself curcumin is only 2 – 9 %. Therefore, scientific research is working with its extracts. One problem with the supply of curcumin is that the active ingredient is only absorbed in small doses in the intestines and cells.

Medically, we circumvent this problem by administering curcumin in an aqueous solution with 150 mg as an infusion intravenously to the patient, thus enabling us to achieve high tissue levels. The intravenous administration of curcumin provides us with an effective anti-cancer drug without any side effects. Within the framework of a holistic concept for an individually tailored cancer therapy, we always use curcumin together with other substances.