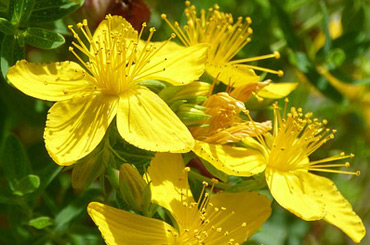 Hypericine is a herbal substance extracted from St. John’s wort (lat. Hypericum perforatum). St. John’s wort has been an integral part of natural and empirical medicine for centuries and its effect on mild to moderate depression has been sufficiently proven and documented. However, hypericin is also playing an increasingly important role in biological cancer therapy, as it is now also recognised by conventional medicine that St. John’s wort extract has a so-called “cancer-protective” effect. This is because, among other things, an enzyme called “CYP1A1” is involved in the fact that it is chemically involved in healthy cells mutating into cancer cells. Hypericine (and also other substances of St. John’s wort) inhibits or stops the action of CYP1A1.

In cancer therapy, we use hypericin as a powerful, natural photosensitizer (light-sensitive red dye), which is used in photodynamic therapy (PDT) to treat cancer.

In oncology, the advantage of taking hypericin is that it increases the photosensitivity of the body and thus of the tumour cells. This effect is used in modern cancer treatment. The fluorescent hypericin accumulates more and more in cancer cells. The reasons for a high accumulation of hypericin in tumor tissue are to be found in the structural as well as the physiological characteristics of a cancer cell. If the tumours enriched with hypericin are then irradiated with laser light during photodynamic therapy, the damaged cells are destroyed.